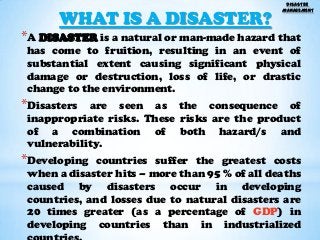 Disaster is a term that is used to describe a large-scale event that affects a community, its environment, or both. It disrupts the functioning of a community and causes material, economic, and environmental losses that exceed the capacity of the community to cope with the event. Disasters can occur naturally, man-made, or intentionally.

While there is no way to prevent natural disasters, there are ways to reduce the effects. One way to do this is to prepare for them in advance. For instance, in developed nations, buildings are built to withstand most earthquakes, and storm shelters are built so people can go to shelter during a storm. Flooding also causes health hazards such as the contamination of drinking water and air pollution. It also displaces people and can be traumatic.

In some cases, natural disasters are triggered by conflict. For example, conflict-torn areas such as the Philippines, Iraq, Colombia, and Haiti can be vulnerable to disasters. In addition, the definition of a natural disaster depends on the country’s capacity to respond to such disasters. In Somalia, for example, the government controls just a few blocks of the capital city, making it impossible to effectively respond to flooding and drought.

The impact of natural disasters is far-reaching. The impacts on public health are often direct and indirect, and include increased incidences of infectious diseases and malnutrition. These effects are often exacerbated by damage to the health system and water infrastructure. Additionally, communities are displaced, which can cause increased homelessness.

Natural disasters can be divided into three categories: hydrological, geologic, and biological. Flooding, for example, is a natural disaster that causes large amounts of water to flood an area and destroy people and property. These natural disasters can occur as a result of heavy rainfall, hurricanes, or even broken dams. They can be devastating and are a predictable feature of life on earth.

In addition to causing destruction, natural hazards can lead to health problems and loss of life. As a result, disaster recovery efforts must be targeted to reduce health and social impacts. In addition, public health workers must be ready to respond to injuries and implement systems to prevent the spread of infectious diseases.

Man-made disasters, also known as anthropogenic hazards, are threats to human life that are not necessarily natural. These dangers may affect humans and other organisms, and can affect entire biomes and ecosystems. They can even lead to omnicide, or the loss of all life in a region or biome.

A man-made disaster can be an accident or a deliberate act by people to harm others. An example of a man-made disaster is an explosion. A recent explosion in Puerto Rico triggered an earthquake and a thick plume of smoke that rose to 30,000 feet. Regardless of the cause of the disaster, it is important to support those who are affected by these disasters.

In addition to natural disasters, man-made disasters also cause pollution, death, and destruction of property. A large earthquake, a landslide, or an airplane crash are some examples of man-made disasters. Another example is a collapse of a skywalk in a hotel, which killed many people. A mass casualty incident is also possible in a crowded area, such as a concert or a sporting event. To avoid these situations, there are many papers and guidelines on what needs to be done in case of a large-scale disaster. Some of these documents also provide information on medical needs.

Intentional disasters are man-made events that cause harm to a community. The most commonly affected groups are those who are chronically ill, such as those with diabetes, respiratory problems, and cancer. Following a disaster, patients with these conditions face numerous challenges. The purpose of this national conference is to foster dialogue among policymakers, researchers, and practitioners about the consequences of these disasters.

Symptoms of a disaster

In the aftermath of a disaster, people may experience physical and emotional symptoms such as anxiety, stress reactions, depression, and loss/grief. These conditions can interfere with people’s ability to focus and make decisions. They can also negatively impact sleep patterns and cause them to lose appetite. These symptoms may last for weeks or months.

Children are particularly vulnerable in disaster situations. The National Child Traumatic Stress Network has noted that children as young as infants can experience severe emotional, physical, and behavioral changes in the wake of a disaster. Young children may revert to their earlier behaviors, while older children may show heightened levels of aggression or become depressed. They may also become less interested in chores and schoolwork.

Individuals directly affected by a disaster may experience intense emotions, including grief, panic, and fear. They may also experience difficulty sleeping and a deep sense of guilt. Although these reactions may persist for a time, they generally subside and fade away once the person has had time to process the event and begin healing.

Mental health problems may also surface after a disaster. Mental health services, substance abuse treatment, and stress management can all be provided to the affected populations. Mental and emotional symptoms may include post-traumatic stress disorder, depression, and anxiety. These effects are exacerbated by the fact that individuals may have displaced themselves or have lost contact with their usual support systems.

Impact of a disaster on the immune system

Extreme weather events can exacerbate existing diseases or trigger new ones. They also increase mortality. They also accelerate aging processes and worsen the symptoms of advanced age. A recent study looked at the impact of Hurricane Maria on macaques living on an isolated island. They found that the disaster significantly altered the gene expression of immune cells.