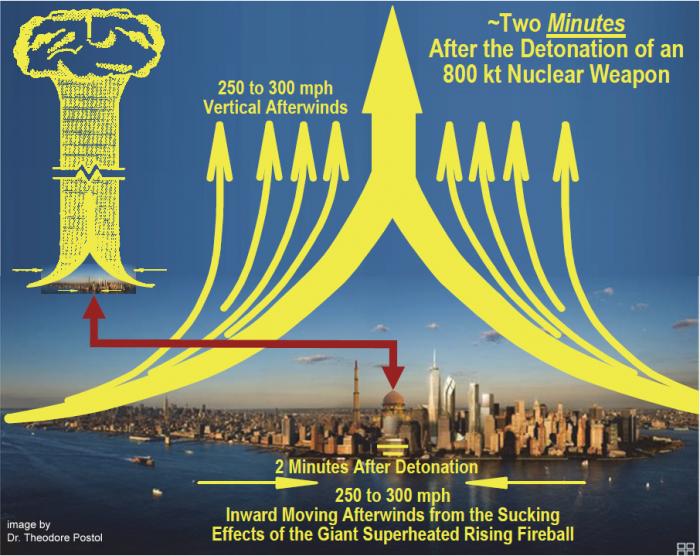 The best way to protect yourself from radiation from a nuclear bomb attack is to shelter in place. Emergency guidelines recommend that you go into a building, basement, or other solid structure in your immediate area. Doing so will prevent radiation from affecting you and your loved ones. But before you go into a shelter, make sure you have a plan in place to ensure your safety.

You may want to seek cover near natural barriers such as hills, rivers, or mountains. In some cases, you may be able to exit the shelter in a few days or less. The heaviest fallout will be in the vicinity of the blast. However, if the blast is severe enough, you may need to stay for several weeks.

Nuclear explosions are dangerous to the environment and the public. The largest blasts would create a fireball a mile in diameter, with temperatures on par with the surface of the sun. The explosion would also cause winds to reach hurricane force. In contrast, smaller nuclear bombs would produce a much smaller fireball. In addition to being highly destructive, the fallout from a nuclear bomb would carry radioactive material for many miles. Because of this, public response will be important in preventing any long-term effects.

Although no one knows for certain when a nuclear bomb will hit, it is important to prepare for the worst. Knowing where to go and what to do when it happens is essential. In some areas, government agencies may have shelters set up for displaced citizens and those whose homes were destroyed by the blast. However, there are currently no plans for a nationwide network of nuclear fallout shelters. Moreover, the time to reach a shelter would be short.

Moreover, it is important to remember that radioactive fallout from a nuclear bomb explosion can cause significant damage and casualties. Fallout is a mix of radioactive material from the explosion and debris from the weapon. The fallout will look like fine sand that settles on horizontal surfaces.

If you’re inside a building when a nuclear bomb goes off, it’s best to avoid standing near windows. The reason is simple: shockwaves can break windows ten miles away and injure those who stand too close. Furthermore, if you’re near a window, the air conditioning and heating systems will be pulling in outside air and spreading contaminated particles.

A recent video released by the city of New York explains what to do in the event of a nuclear attack. The 90-second video begins, “So, we’ve had a nuclear attack – don’t ask me how,” then says, “OK, so, let’s get out of here.” The video is a response to a changing global security environment.

The best shelter is a concrete or brick building with few to no windows. A basement is also ideal. Mobile homes are not recommended as they’re too fragile to offer enough protection. After hearing the blast, try to find a shelter as soon as possible. Ideally, you should be inside your shelter an hour or two before moving.

Besides the obvious dangers of falling debris, nuclear weapons can also cause severe injury. During an explosion, nuclear weapons can produce an immediate fireball, a shock wave, and thermal radiation that can cause second and third-degree burns miles away from the epicentre. Fortunately, most people survive a nuclear blast.

Protecting yourself from radioactive fallout

If you live in an area where there are large amounts of radioactive materials, you should be prepared to get away from the area. You should find a safe place to hide, such as an interior room, basement, or even underground. Do not leave pets or small children unattended. While inside a shelter, you should lock the doors and windows to prevent escape.

The first step is to stay calm. The next step is to get as far away from the fallout particles as possible. Using a heavier material to cover yourself will help to protect you from the radioactive material. Also, make sure you have a safe route to take if the fallout becomes dangerous.

If you are trapped indoors, it is important to get a mask and face mask, as well as other protective gear. If you are not able to wear a mask, you should wash your hands before touching them. Then, if you’ve been outdoors, you should remove contaminated clothes and wash your skin with soap. In addition, you should stay inside for at least seven hours and get a shower to get rid of any remaining radioactive particles.

The half-life of radiation particles from a nuclear event is a few days. Therefore, if you can stay indoors for up to three days, you can significantly reduce your chance of absorbing an unhealthy dose. During this time, you should stock up on water and food. The media and emergency officials will help you with official information. You should keep a cell phone away if you’re not sure whether it’s going to work or not.

If you’re exposed to radiation, you can decrease your exposure by washing off any clothing or shoes you were wearing at the time of the explosion. This will also minimize the amount of radioactive material that may remain on your body for weeks after the bombing.

Be sure to keep yourself warm. Even though the bomb explosion won’t be large, it can still be devastating. Keeping warm is important, but don’t forget to stay covered up. You can use protective clothing such as masks and ear plugs to prevent exposure.

Avoiding standing near windows if a nuclear bomb hits

The most obvious way to avoid being hit by a nuclear bomb is to avoid standing near windows. The glass and metal of windows will not provide much protection against the blast. The safest place to be during a bomb blast is high up in a building. This will allow you to move away from windows and into rooms that have substantial walls. However, this is not always practical.

If you must be in a building with windows, do your best to find a place to hide behind. If you can’t do that, it’s best to lie face down. This will protect your face and arms from being exposed to the blast. As much as possible, try not to touch your face or mouth.

In multi-story buildings, choose a central location and avoid the upper or lower floors. Windows can be shattered and dangerous debris can fall up onto people nearby. Similarly, do not take shelter in a car. Although it may seem safer to run away, cars don’t offer much protection from nuclear fallout. Depending on the location, you may be able to find additional protection in an underground parking garage.

When a nuclear bomb hits, there’s a 15-minute window in which to seek safety. Once the explosion hits, the fallout will begin to hit the surrounding buildings and will be spread to people in the vicinity. As a result, it is extremely important to get inside a building with a solid basement and avoid the windows. During this time, you will want to keep your outer layers of clothing off.

When a nuclear bomb strikes, the best place for people to shelter is a building with reinforced walls. This type of structure can be a reinforced bunker for those who live in buildings without basements. Otherwise, choose a strong part of the building, such as a laundry room or small bathroom. The internal walls will reflect the incoming shock wave and double the pressure inside the building.